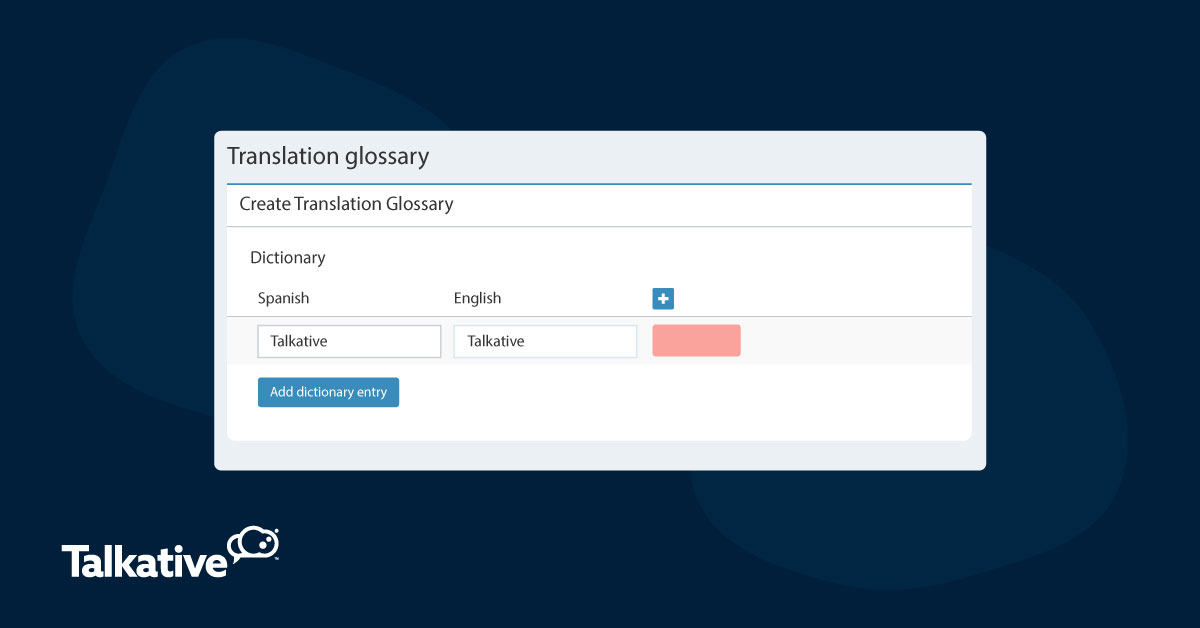 It means that you can ensure company and product names always remain consistent and on-brand during any chat interaction using automatic translation.

What’s more, this latest Talkative update adds the ability to import any existing translation glossaries to your Talkative set up.

So, if you’ve got a translation glossary ready to go, you can get started today and reach more customers than ever before!

While both the support agent and the customer’s text could be translated in an instant thanks to our Google Translate integration, any company, product, or service names entered during the conversation were at risk of getting translated too.

So, instead of reading ‘Talkative’, Spanish customers interacting with Talkative might see the translation ‘Hablador’!

It’s in order to prevent this kind of mistake that we created the Translation Glossary feature.

It means a much more consistent conversation and interaction experience - whatever language your customers use.

Creating glossaries for multiple use cases

One of the most useful features of this update is your new ability to create multiple glossaries - allowing you to meet multiple use cases with ease.

For instance, say you’ve got a team of customer sales agents dealing with inbound interactions via live chat.

At the same time, you’ve got another team of support agents dealing with customer service queries and requests.

Each of these teams’ members are going to be involved in different conversations. As such, they’ll be using different terminology.

Which is where Talkative’s Translation Glossaries come in handy.

Instead of having one master file of glossary terms, you can choose to split up your glossaries on a use case basis.

For companies with a huge audience and many use cases, it means a much easier method of organizing and assisting your team.

Still, if you want to keep things simple with only a few key terms translated across your core focus languages?

With Talkative, you can do that too. Job done.

A UI that’s actually designed around the user

Better organization and improved customer reach aren’t the only perks to this update.

With Talkative’s Translation Glossaries - unlike competing solutions - you’re able to edit and update your glossaries with an easy to use interface that’s built around you.

Other communication platforms that offer automatic translation will often require you to perform manual file formatting.

Even Google’s glossaries are provided with the expectation that you’ll be integrating them manually.

However, with Talkative, you get a much easier life.

Not only do you have a user interface that’s intuitive and designed around your needs, you also have the ability to bring over any translation files straight into the system.

It means no stressful setups and immediate, consistent, and on-brand translations.

To get started with the new feature, check out our support article on: Creating Translation Glossaries!

And for more on our latest updates, check out our most recent release notes.

New to Talkative? Want to learn more about what our platform could do for your customers’ digital journey? Book a demo with Talkative today!